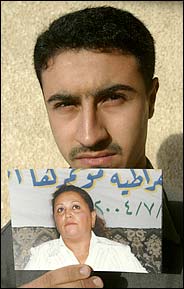 NYT –  For all the violence that engulfs this land, Wiijdan al-Khuzai’s death stands out. She had begun her campaign on behalf of Iraq’s women in the 1990’s, helping to open a woman’s center in Hilla, in the south, where she distributed food and other help to widows and mothers.

Wijdan al-Khuzai would not give in.

The threats came usually by cellphone, a sinister voice promising a terrible end if Ms. Khuzai pursued a seat in Iraq’s national assembly.  Sometimes, as she drove around Baghdad, she would glance into the rear-view mirror and notice that another car was following her.  “Terrorists,” she would say, snapping her cellphone shut.

Then she would get on with her campaign, a quest she hoped would ultimately raise the prospects of Iraqi women. Ms. Khuzai, a 40-year-old mother of five, saw in the elections on Jan. 30 a rare moment to steer her country in a more humane direction. She was determined to make the most of it.

“Wijdan always said, ‘If you have a goal, go after it, and don’t let anything stop you,’ ” recalled her sister, Nada. “She thought God would save her.”

The Americans found Wijdan al-Khuzai’s body on Dec. 24, on the airport highway, a grim stretch rife with insurgents. Ms. Khuzai had been shot five times, once in the face. Her shoulder blades had been broken, and her hands had been cuffed behind her back so tightly that her wrists bled.

“The police said she had been tortured,” said her brother, Haider Jamal al-Khuzai.

One Reply to “Tribute to Wijdan al-Khuzai”