Re: “A Possible Declining Trend for Worldwide Innovation” now gone to archive.

See Hope for Hungry Children, Arriving in a Foil Packet
by Michael Wines from Maradi, Niger for the August 8 NYT:

….At this epicenter of Niger’s latest hunger crisis, Plumpy’nut is saving lives….Plumpy’nut, which comes in a silvery foil package the size of two grasping baby-size hands, is 500 calories of fortified peanut butter, a beige paste about as thick as mashed potatoes and stuffed with milk, vitamins and minerals. But that is akin to calling a 1945 Mouton Rothschild fortified grape juice.   Since the packets came into the hands of relief organizations during the Darfur crisis in Sudan, they have been revolutionizing emergency care for severely malnourished children who are old enough to take solid food, by taking care out of crowded field hospitals and straight into mothers’ homes.

“This product, it’s beyond opinion – it’s documented, it’s scientific fact,” Dr. Milton Tectonidis, a Paris-based nutrition specialist for Doctors Without Borders, said in an interview here. “We’ve seen it working. With this one product, we can treat three-quarters of children on an outpatient basis. Before, we had to hospitalize them all and give them fortified milk.”

P.S. Graham_72 might like the story, too; serendipity included. More excerpts (and beautiful photo,) after the jump. 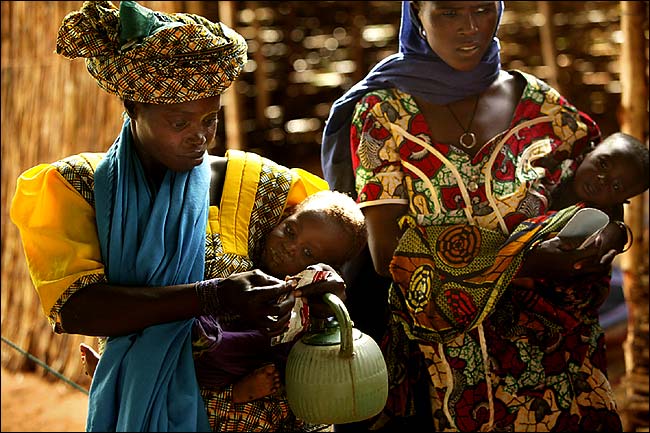 Michael Kamber for The New York Times
A mother feeding the food supplement Plumpy’nut to her child in Tibiri, Niger. It is distributed to mothers of severely malnourished children.>

…Traditional malnutrition therapy hospitalizes the tots, nursing them to health with steady infusions of vitamin-laced milk. Then they are sent home with powdered milk formula to complete their recovery. It works well, but milk is costly, must be mixed from water and is prone to spoiling.

And when mothers prepare the formula with the dirty water all too common in impoverished villages, babies get sick.

In comparison, Plumpy’nut – the name melds the words “plump” and “peanut” – costs less than the milk formula, has a two-year shelf life and need not be mixed with anything. Its sealed packaging and thick consistency make it a poor home for disease-causing germs that thrive in milk.

Perhaps most revolutionary, however, is that mothers, not doctors, can give it to their toddlers. That not only reduces costs, but also frees the doctors to treat the sickest children, who often suffer not just from malnutrition, but also from diseases like malaria or dysentery.

The usual course of treatment is four weeks of Plumpy’nut, costing about $20, along with grain-based food like Unimix, a vitamin-packed flour that can be made into the porridge many Africans eat. But some children return to health in as little as two weeks.

The product is the brainchild of a French scientist, André Briend, who had labored in vain for years to concoct a ready-to-eat nutrition supplement, until serendipity – a bottle of the popular Nutella breakfast spread on his kitchen table – led him to try a paste instead using candy bars and other kinds of food. Later, Nutriset, a French company that specializes in making food supplements for relief work, began packaging the formula under the name Plumpy’nut….

Theodore Bitangi, a 33-year-old nurse who oversees the Maradi feeding centers, says that the program is growing almost as rapidly as its patients.

Mothers who have been feeding the paste to their babies would hardly disagree. “As soon as I got him home, he started eating it – every day, aggressively,” Idrissa, 24, who has no last name, said of her 2-year-old son. “And after three days, I could see a big difference. The change was abrupt.” Her son, who refused to open his eyes before starting the Plumpy’nut regimen one week ago, has added fat under his sagging skin and, when his packet is finished, cries for another.

Raham, 45, who has no last name, walks an hour each way to the clinic from her village, Madata, to pick up a weekly bag of Plumpy’nut for her year-old son, Safia Ibrahim. “It’s no problem to walk that far,” she said, “because it’s for the health of my baby. And there’s nothing to eat in our village.”

One of the virtues of Plumpy’nut is that it can be made almost anywhere with local materials and a slurry of vitamins and minerals prepared by Nutriset….

2 Replies to “For Gandalf the cynic”