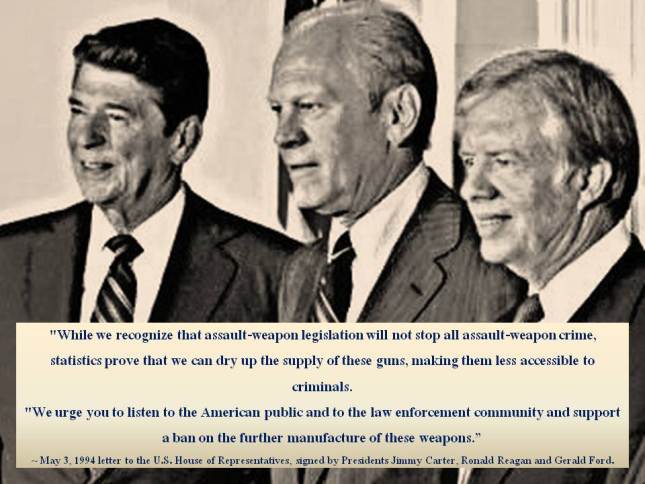 Dianne Feinstein’s bill to curb violence using assault weapons was launched today and to me looks like a good start – it would “prohibit the manufacture or importation of 158 specific military-style assault rifles, ban large-capacity magazines of more than 10 rounds” and unfortunately contain a list of 2,200 gun models specifically not banned by the legislation. There would be no sunset provision in the law. However, the bit I like best is likely to anger and inflame the NRA the most.

A summary of the new assault rifle ban published on Feinstein’s website suggests that it will require federal registration of all existing owners of the proscribed assault weapons and large-capacity magazines.

Such existing weapons, dubbed “grandfathered weapons” in the bill summary, would require FBI background checks for all changes of ownership and would have to have their type and serial number lodged with a federal database. Owners would have to be identified by photograph and fingerprints. The identification of the owner would have to be certified by local law enforcers under a registration scheme run and paid for by the Bureau of Alcohol, Tobacco and Firearms.

The registration scheme would be designed to avoid one of the main weaknesses of the 1994 assault rifle ban, which did not apply to any weapons made or bought before that date and therefore did not touch millions of lethal guns already in circulation.

Feinstein freely admits that the objective is not to take guns away from people but to  “dry up the supply of these weapons over time”. I’m just fine with that  – gradual mitigation has always been the name of the correct game.

Asked if she thinks her bill will pass, however, Feinstein said “the answer is we don’t know”.