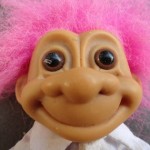 Time was when trolls would get to me; the idea of so much hateful, rampant ignorance was almost more than I could stomach…and so I’d prove the definition of insanity- arguing on da Interwebs. Then I realized that this is the Internet, where everyone, from the blindingly brilliant to the most brain-dead knuckle dragger, can have their say. (Where I fit on that spectrum is something I’ll leave to others to elucidate.) Then I learned that I could find entertainment and comic relief in such epic displays of basic reasoning skills…and I began to enjoy life SO much more.

What I really love are those who, having no real argument or way to refute someone’s point, resort to cheap, disrespectful insults. Better to be thought a fool that to go on the Internet, press ENTER, and reveal yourself to be in the throes of Obama Derangement Syndrome and/or too stupid for words.