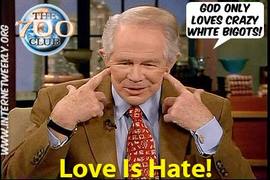 Today’s lesson in why I detest modern Christianity comes to us courtesy of Matt Barber. Through selective interpretation of Scripture and a virulent hatred of homosexuality, Barber is nothing if not a walking, talking parody of the Gospel of Jesus Christ. Of course, Barber’s flavor of Christianity gives him license to believe that his is the One, True, and ONLY Faith©. Ergo, those who don’t believe EXACTLY as he does are in the fast lane on the expressway to Hell. So much for Christian tolerance and charity.

(Oh, and that thing about the Bible being the immutable Word of God? Do you have any idea how many people had a hand in writing it? It’s a patchwork document put together by a raft load of writers with their own agendas. It’s been rewritten and edited more than a Jay Leno monologue.)

Barber pretends to preach his homophobic intolerance out of love, but it’s difficult to see how his self-absorbed and self-indulgent “Christianity” is anything but a way to discriminate against those whose lifestyle he finds “icky.” Loving people don’t post hateful cartoons directed at the Boy Scouts of America, who recently voted to allow gay Scouts into their ranks. Loving people don’t publicly define homosexuals as “less than” and therefore unworthy of the rights and benefits that accrue to “normal” (i.e.– heterosexual) people….

2 Replies to “Matt Barber: How can so much virulent homophobia NOT be hiding a deep, dark secret?”