Lost in the debate sparked by abortion issues in the special legislative sessions was the fact that Gov. Rick Perry limited the ability of women to win equal pay in court. Perry recently vetoed HB 950, which would have inserted into state law the protections in the federal Lilly Ledbetter Fair Pay Act of 2009. But for the veto, Texas would have been the 43rd state to pass such a law, ensuring that the state continues to be a national outlier in all the bad ways. 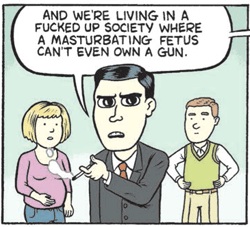 It’s been said (often by me) that Texas is a great place- if you’re a Conservative White Christian male, and as such a member of the club that continues to demonstrate that the world- or at least the Lone Star State- is still their oyster. By vetoing HB 950, Governor Pander McCrazy demonstrated once again his willingness to do the bidding of business interests. While no doubt arguing that he’s trying to maintain his state’s reputation for job creation, the Governor sees nothing wrong with perpetuating a system where women continue to be paid significantly less than men for the same work.

On the one hand, Texas is just another authoritarian Conservative-White-males-know-best red state, where “small government” Republicans manifest their hypocrisy on a daily basis. Then again, Texans elected Rick Perry and the rest of the Republican nonentities in Austin, and by so doing they’re complicit in their own subjugation. Women are half the electorate in Texas, and until now they’ve stood idly by while Republicans perpetuate a system that consider them to be the property of men and second-class citizens.

I lived in Texas for 10+ years (3,722 days…not that I was counting), and the things that are garnering national attention these days are the same things that I saw happening for years. With one of the most unaware/uninvolved/just plain clueless electorates, Texans continue to elect Right-wing Christocrats because…well, Jesus. The people they send to Austin tend to be crazy, intolerant, uber-Jesus-y wingnuts whose governing philosophy is “What Would Jesus Do to protect my fears and prejudices?”