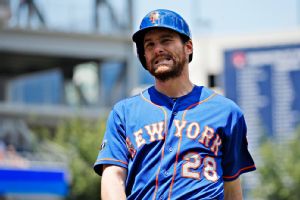 I meant to blog about this when the baseball season opened in April but it slipped my mind. Thankfully I have a second chance to:

CHICAGO — New York Mets second baseman Daniel Murphy and his family will be guests at the White House on Monday for a discussion about the state of working dads.

Murphy received talk-radio backlash after choosing to take paternity leave and miss the team’s first two games of the season to be present for the birth of his first child on March 31. Murphy’s wife Tori gave birth to 8-pound, 2-ounce son Noah about an hour before the first pitch of the Mets’ season.

The White House Summit on Working Families will be held in the South Court Auditorium of the White House. It aims to advance talk about how fathers play a role at home, discuss the challenges of balancing a career and family, and advocate for rights such as parental leave from work.

Chief of Staff Denis McDonough, Transportation Secretary Anthony Foxx and Chairman of the Council of Economic Advisors Jason Furman will participate in the discussion along with Murphy.

It’s really odd how this nation gets so hung up on bad choices that parents make – single moms, dads abandoning children, divorce – and so uptight about how children need both parents in their lives, and here comes a story of a man, a high-profile professional baseball player, taking a few days off at what amounts to a meaningless time in the season, to assist in the birth of his baby.

Gee, it’s almost like he broke the rules of the corporatocracy!

He did, by the way. There’s a school of thought in the workplace that’s lasted the last thirty years or so: you gave all you had to the job, and then some. Productivity means profitability, means you get to keep your job.

We’re seeing the cracks in that façade as people wake up to the fact that income inequality has skyrocketed since the Reagan years, while productivity has risen even faster and companies have literally enslaved workers until they’ve used them up and discarded them.

It’s gotten so bad that some companies are even forcing workers to take vacations.

Birthing leave, to coin a phrase, is a step in the right direction. By excluding the father from the initial bonding process, you make the relationship between that parent and child more tenuous. Babies imprint, and if Dad is working until 10 o’clock at night to keep his job because Mom can’t work anymore, that’s not leaving a whole lot of time for that kind of bonding. Murphy has spent enormous swaths of time away from his kid during the season and kudos to the Mets for standing up for him.