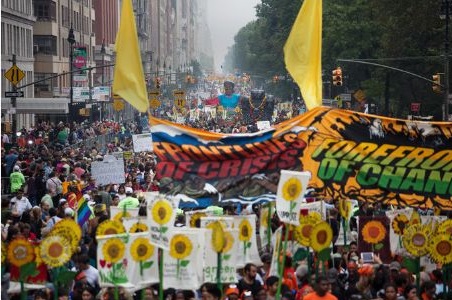 The People’s Climate March, a massive global rally on Sept. 21 in New York City, will lead up to a specially called-for United Nations summit on the climate crisis.

To date, 950 supporting organizations are supporting the mass rally, including non-government organizations, labor unions, grassroots networks, churches and faith organizations. Their members and volunteers will join in the two to three mile march through Manhattan from Columbus Circle, east along 59th Street, down 6th Avenue, west along 42nd Street to 11th Avenue.

The march in New York is being held in solidarity with events around the world — 63 other events in North America, six in South America, 54 in Europe, 10 in South Asia, and 32 in Australia — in cities like Berlin, Paris, Istanbul, London, Melborne, New Delhi and Rio de Janerio, among many others.

“Mass mobilization is one of the best ways we know of to shock the entire system into action. Mass marches don’t always work: we weren’t able to stop the buildup to the war in Iraq. But they sometimes succeed in historic ways. Take the 1982 anti-nuclear march, which pushed a hawkish Ronald Reagan to strike a deal with Russia and start reducing nuclear warhead arsenals. Or consider the 1963 March on Washington, which helped pass the Civil Rights Act,” said Eddie Bautista, New York City Environmental Justice Alliance.

Can the People’s Climate March on September 21 Ignite a Political Revolution?

Update – some good news: Lobster Boat Blockade – In a major — and unexpected — victory for the climate movement, the criminal charges against two men who used a lobster boat to block a massive coal shipment were dropped this morning.

Also: Alternet (TruthDig/Democracy Now!): The Climate March: Will it be a call to arms for the Earth, or are more radical actions needed? – McKibben and Hedges debate.