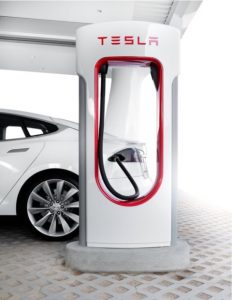 The move to 200-mile EVs gives us an opportunity to rethink what we are doing. A single DC fast charging standard rather than 3 would go a long way to EV dominance in the marketplace.

In my previous blog “The 200-mile Paradigm,” I discussed how the 200-mile range electric vehicle revises the charging infrastructure needs significantly downward where only around 2900 well placed quick charging sites can meet nearly all of the charging needs for the entire United States. This was important because with nearly all automakers coming out with base model electric vehicles with 200-mile range most charging would take place at home and the only need for charging away from home would be traveling across country or traveling to places where either the round trip or the destination was over the vehicle’s 200-mile range. Having slow level 2 charging stations all over the place, as would be needed with the current low range EV model, wasn’t necessary since 200 miles of range would be more than the daily average for nearly all drivers. With AAA’s finding that on average Americans only drive about 32 miles a day, the 200-mile base range of the new EVs would be over six times that average. The problem with DC fast charging is that there are three standards in the US, CHAdeMO, which is what most Japanese

brand vehicles use, the Society of Automotive Engineers standard called the CCS (Combined Charging System also known as SAE Combo plug), which is considered the US and European standard, and the Tesla Supercharger system.

Tesla, since it’s vehicles have much larger battery capacities, needed a system that was much more powerful then the other two standards that were largely championed by the major automakers. The other two standards, CHAdeMO and CCS (SAE Combo), were fine for the smaller batteries before the 200-mile ranging EV paradigm, but now the major automakers are realizing that their championed systems would take much longer to charge in the new reality of the 200-mile EV. For example, my Nissan Leaf using its CHAdeMO quick charger port would charge up to 80% typically in a half hour. With the current CHAdeMO standard a 200 mile EV could take an hour and 20 minutes to get to 80%. Knowing this new reality GM has begun to push for the SAE to raise the amount of electricity that can flow through the SAE Combo plug. However, the SAE Combo standard was never designed for this kind of wattage and there is a chance that increasing the wattage of this standard may require a complete remaking of the onboard charger and the charging station’s power electronics. Faster charging is crucial for the new vehicles because the idea behind quick charging is that long distances can be traversed with short, half hour or so stops at quick chargers along the way. Thirty minute breaks on long trips are tolerable, however, a one hour and 20 minute stop for charging would be off-putting to many drivers.

Tesla is building out its own charging infrastructure to advance this concept. They focused their proprietary infrastructure on connecting cities and it makes its chargers available to most of it’s Model S and X owners for free. It is now possible to travel from coast to coast in the US via the network of Tesla Superchargers, as well as travel between many major cities; that is as long as you are driving a Tesla vehicle. If you are not driving a Tesla and trying to go long distances the quick charger infrastructure is virtually nonexistent. 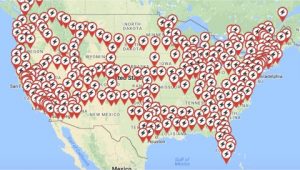 Remember from my last blog that a relatively few quick charging sites are needed to service the entire country. I calculated that the entire United States including Alaska and Hawaii would be fully serviced with somewhere around 2900 charging station sites. Tesla as of March 2016 had 611 Supercharger sites, with some 3600 individual plugs available for charging. If 80% of those sites were located in the right places, some 488 sites, then we would only need to fill in the remaining 2412 sites to make EVs as functional in long distance travel as petroleum fueled cars for most people.

There are too many standards for quick charging to make a buildout of infrastructure cost effective. In order to meet the charging needs of long ranging 200-mile EVs with three quick charger standards we would need to build three times the number of chargers than we would if we only had one standard. We only need one standard for quick charging. With Tesla as the universal charging standard for the US we would already have about 1/6th of the infrastructure built. Making Tesla’s Supercharger the standard would allow people with new 200-mile EVs able to take advantage of the Tesla Supercharger network that is already in place to travel long distances and across the country. By using the Tesla system there wouldn’t be any need to modify existing CHAdeMO and CCS/SAE Combo standards to have much higher wattage outputs in the near future to accommodate the new 200-mile EV paradigm since the Tesla system was built for large capacity, 200-mile plus range EVs from its inception. Tesla’s standard can already use the existing SAE j1772 level 2 standard and adaptors can be purchased to use the existing CHAdeMO standard chargers. Tesla people have been working out how to adapt the CCS/SAE Combo to work with Tesla vehicles. With Tesla soon to be able to use the very small infrastructure that has been built using the SAE Combo standard and already being able to use CHAdeMO and the universal SAE j1772 level 2 standard these existing chargers will not go to waste.

You might be asking if it would be OK for other manufactures to use the Tesla standard given that it is a proprietary standard patented by Tesla Motors? Tesla’s CEO Elon Musk has stated many times that he wants other automakers to use Tesla’s network of Superchargers. He, earlier this year while in Paris, said, “We want to do anything we can to help the advent of sustainable transport – so our network is open to any other manufacturer that want to use it.” You might ask, if Tesla wants other companies to use its system, why patent its innovations? Tesla has justified its applications for patents to protect the innovations from attempts to block the technology. The company has promised not to sue anyone using its patented electric vehicle technology as long as they are using it with sincere and honest intentions. Over a year and a half ago Tesla’s CEO Elon Musk let it be known that they were working with other automakers on sharing the Tesla network, however, he did not mention which particular ones they were working with.

You now understand that having one standard will be very beneficial to expanding the marketability and reach of the electric vehicle. You also understand that the Tesla Supercharger network is the best choice for that one standard now that 200-mile EVs will be the norm instead of the exception. You also know that the Tesla has already built out about 17% of the charging network needed to cover the entire United States, and that having one standard will be much more cost effective than trying to build out the infrastructure for three standards. Now I need you. I need you to talk this idea up. I also need you to tell the automakers that you want the Tesla Supercharger standard for your next EV. You will need to contact your political leaders in national positions and tell them that you want one Tesla based standard for the country. Politicians should think about making laws that make this happen. Automobile executives should make pledges to one standard and that standard should be the Tesla one.

These latest postings of mine have rekindled my passion to see electric vehicles become commonplace. I believe that this may have opened a door to establishing a national campaign to move Federal, state and local government money budgeted for electric vehicle infrastructure towards completing a network of charging sites that serves the entire country. I would like that network be one standard and that standard be Tesla. It just makes the most sense. However, even if the three standards remain, a network of quick charger sites 50 miles apart connecting all major cities would go a long way to making electric vehicles fully competitive with petroleum based cars.