~ from a newsletter by Chuck Spinney

Attached is a short Syrian sitrep and summary of the central points of a plan being advocated by Joshua Landis, a professor at the Univ. of Oklahoma, and one of our nation’s leading experts on Syria.  Landis runs an informative blog, known as Syria Comment and his plan is discussed at this link in a video interview with Fareek Zakaria of CNN.  My guess is that Landis is well aware of the limitations and uncertainties of his proposal to solve what has become a gordian knot of contradictions.  Zakaria’s gushing enthusiasm for the Landis plan may not reflect Landis’s confidence in whether or not this plan will work.

For example, a subsequent blog entry on Landis’s site, The Islamic State and Jabhat al-Nusra: A Looming Grand Jihadi Alliance?, Posted by Aymenn Al-Tamimi on Friday, November 14th, 2014, lays out a very interesting argument outlining reasons why al Nusra and ISIS are unlikely to form a lasting alliance.  If Al-Tamimi is correct, this may well render impossible any efforts to stabilize a moderate Sunni state.  The bullets below summarize Landis’s points as I understand them; my comments are in red.

In no way implying criticism, the Landis plan may be unworkable. But pressure to partition Syria is going to grow, so it is worth thinking about its implications.

END_OF_DOCUMENT_TOKEN_TO_BE_REPLACED

Obviously, that was tongue in cheek, but at the same time an admission that it was actually pretty difficult to describe what neoliberalism is.

This two year-old conversation left me with one long-term brain nag.

Two weeks ago I was having a twitter conversation about the French historian/philosopher Michel Foucault. During the conversation an American intellectual and economic historian at the University of Notre Dame, Phillip Mirowski, came up. My interlocutor suggested I read his book on neoliberalism, “Never Let A Serious Crisis Go To Waste.”

After the conversation ended I went to google books, read the first few pages and immediately ordered it from Amazon for next day delivery. (No, it was not available at any local bookstores, I called around first before I went to Amazon.)

All I can say is this: go get that book. It’s heavy. It’s profound. You’ll get bogged down in theory. You’ll have a hard time breathing the rarified air. You will have to work to read it. It’ll make you reach for the dictionary thirty times, as I have already done so. It makes demands on you. It is a book of serious scholarly criticism from the real Left. Filled with hilarious bon mots and aperçus as it is it’s the multiple explanations of just what neoliberalism is and the dissection of its intellectual provenance that finally puts into words that hitherto inchoate gut feeling I was sputtering on about two years ago. Trying to understand how Hayek and Friedman led to Bernanke and how Hayek and Friedman and Rand gave us Greenspan and so much more. It’s an historians connect-the-dots whodunit on just how our finance and banking and so-called “efficient markets” gifted us this hideously opaque, protean post-modern dystopia of self-made entrepreneurs instead of a republic of citizens.

Really, go get the book.

A little thought experiment: imagine if Samantha Power had been running our foreign policy during WWII? In the quote below, replace Syria with USSR.

U.S. coordination with Syrian President Bashar al-Assad over the airstrikes: Syria, she said, is not a reliable partner. “You’re committing terror against your people, you’re the ones using chemical weapons and barrel bombs, etc. so we didn’t ask for permission — we just offered a notification.””

This admin runs foreign policy like Barney Fife.
Oh yeah, and didn’t she call Hillary Clinton a monster once, too?

1. What’s the exit strategy? Is anyone discussing what that is? How do we get out? It’s simple to get in. Getting out is the hard part.

2. What are our political goals in Iraq in re: IS(IS)? What do we hope to achieve? And in what time frame? Will our means achieve the ends?

3. These are just some questions that President Hopey-McKill-List™ did not answer last night. He didn’t even come close to answering.

Karl Marx wasn’t wrong about everything.

Tonight, President Hopey-McChange goes on the television to attempt the following (as expressed by Chris Nelson):

The President goes on nation/world TV tonight in what’s being billed as an effort to rally the people, and our allies, to a robust, long-term, strategically and historically essential battle to the death against ISIS and its ilk.

It’s neither essential strategically or essentially. Why? First, because ISIS can be contained. Second, because ISIS does not pose a threat to our vital national interests. Robust and Long-term? Those can’t mean anything other than wasted lives and treasure.

The only silver lining I can see to this is the following: by our obsessive focus on Iraq we can’t escalate against the Russians. Our military simply cannot do that much at one time and our allies in Europe won’t do it. So, there is that.

Everyone is aware that Russia is still a nuclear power, right? And that we spent more than 30 years avoiding war with it? #WTH?

In all seriousness, I think the mindset of the National Security Elite has changed. First, Exceptional people do not negotiate. Second, every lesson we’ve been told we should have learned from World War II is this: you do not negotiate with aggressors. You fight them. (There is also the Holocaust lesson which wasn’t learned, either.)

So, Americans do not and will not and cannot ever negotiate with aggressors. And since the United States of America is imbued with “Exceptionalism” anyone who opposes the US is wrong. And if you are wrong you will soon be an aggressor. (Samantha Power would love that formulation!) Therefore, we will soon be at war with Russia unless they do everything we ask of them, which basically means roll over and act like a lap dog (basically what the Brits do).

Ponder that for a while. Then ponder how easy a solution could have been.

Ponder where all this bother takes us: the Ukraine. Imagine that it is increasingly looking like we are going to fight a shooting war against Russia, in its neighborhood, for the Ukraine. (For the record, I very well may have been wrong about Western unwillingness to stand up for the Ukraine.)

Ponder that, but this time with nukes.

. . . when another state steps up to the plate and makes Texas look less stupid. In this case it’s Ohio:

Science educators have recognized that teaching science as a large compendium of facts, without reference to the scientific process and theories that bind them together, simply leads to uninterested and uninformed students. So it’s a bit mind-boggling to discover that an Ohio state legislator is attempting to block educators from teaching anything about the scientific process. And for good measure, the bill’s sponsor threw politics and creationism into the mix.

Take the process out of it and you take the critical thinking out of it and then you have students learning rote facts by memory. That doesn’t produce a very dynamic culture.

I wishes to engage in a bit of “I FUCKING TOLD YOU SO.”

It was a bad idea to bomb Assad and I said so last year.

The key to successful   strategy is to always have more options than your enemy, always preserve room for maneuver, rarely, if ever, burn a bridge and never, ever use force for anything less than vital strategic national interests.

When it comes to foreign policy the entire US establishment needs to take a remedial course on “strategery.”

Right and left: idiots all.

And Stephen Walt has their measure right here:

Somehow, I don’t think FDR, Geo.Marshall, DDE, or even LBJ would have been as easy to spook as today’s NatSecElites. EVERYTHING scares ’em.

They’d all jump at their own shadow. 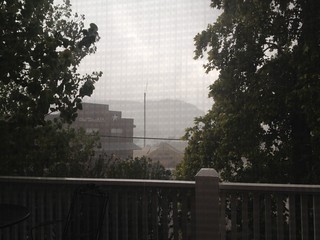 I’ve never seen Trans-Pecos Texas so green. I’m 43 years old and admittedly I’ve been coming out to the Big Bend area since my late twenties so that’s not a very good statistical sample.

Be that as it may: I’m glad that the West of Texas isn’t in hardcore drought like it has been in years passed. I’m also glad to see just about every creek and river on my route for Fort Davis in good health.

All except the Pedernales. That river is just dead. Good job Austin!

Here is a link to the Drought Monitor. It’s current for Texas. Look at the area worst hit in Central Texas.

The rest can be read here, complete with photos of West Texas.

Here’s my tweet with the link to the story:

#blackopencarry is when we see whether or not Libertarians are truly color-blind. http://t.co/QrgCVQL3VB Libertarians: put up or shut up.

I happen to think anyone, black, white, Hindu, Cherokee, Chinese, Maori, Indigenous Australians or whomever else you can think of walking around carrying a loaded weapon out in the open in public is a fool and asking for trouble, but hey, what the fuck do I know? I’m just a dirty fucking hippie (who grew up hunting).

The police can shoot young African-American men with impunity.

The militarization of police forces across the nation is almost complete.

Militarized behavior by the police is now pretty much an accepted and normalized fact of life, especially after the Boston Marathon Bomber Manhunt.

We’re passed “free-speech zones” now. Remember how quaint those were? If you’re protesting, peacefully or not, the police are going to bust you up. Furthermore, the police can raid the places where peaceful protestors gather and confiscate their supplies. Due process is not necessary.

Reporters and journalists can and will be arbitrarily detained and/or tossed in jail. This began during the BP oil spill, increased with Occupy in New York and now is intensifying in Ferguson. The police will shoot journalists in the back with bean-bags and rubber bullets even if the journalists have complied with police demands.

The airspace above the affected areas can be completely closed to the media even when there is no risk.

Have I missed anything?

It’s like Gov. Nixon called Eric Cartman on the phone and said, “hey, you’re in charge of the police effort in Ferguson now.”

UPDATE: the officer in the video has been fired.

I was gone for more than six weeks and in that time did not read or watch any American news, even once.

But this place? This place is fucking insane, like rubber-room, straight jacket bonkers.

You can find the last batch of photos, about two dozen of old town Queretaro, here.

If you are interested in reading about Mexico you can go here. I’ll be writing up at least one more blog post on Mexico and probably another one on the whole archeology field school experience. Those you can find at www.seanpaulkelley.com.

Here are the links to all of this summer’s travel photos by adventure:

Peoples of the Silk Road