Retail giant Walmart enlisted the help of a private military contractor and the FBI to spy on workers pushing for a $15 hourly wage and organizing Black Friday protests in 2012 and 2013, newly released documents (pdf) reveal.

“We are fighting for all workers to be paid a fair wage and enough hours to put food on the table and provide for our families,” said Mary Pat Tifft, a Wisconsin Walmart employee of 27 years. “To think that Walmart found us such a threat that they would hire a defense contractor and engage the FBI is a mind-blowing abuse of power.”

A document made public Tuesday by worker organization OUR Walmart reveals company testimony to the National Labor Relations Board (NLRB) in January stating that Walmart had enlisted the help of arms manufacturer Lockheed Martin and the FBI Joint Terrorism Task Force to monitor workers who were organizing for higher wages and the right to unionize. OUR Walmart workers said they were illegally fired and disciplined for taking part in the “Ride for Respect” strike during Walmart’s shareholder meeting in June of 2013.

But the surveillance had long been in progress. Walmart executives mobilized the so-called “Delta” emergency response team in 2012 when they first got wind of plans for a nationwide Black Friday worker strike. As Bloomberg explained in an investigative piece published Tuesday, “the stakes were enormous.” In addition to the NLRB testimony, the new reporting states, “The details of Walmart’s efforts during the first year it confronted OUR Walmart are described in more than 1,000 pages of e-mails, reports, playbooks, charts, and graphs.”

The Justice Department and FBI have formally acknowledged that nearly every examiner in an elite FBI forensic unit gave flawed testimony in almost all trials in which they offered evidence against criminal defendants over more than a two-decade period before 2000.

Of 28 examiners with the FBI Laboratory’s microscopic hair comparison unit, 26 overstated forensic matches in ways that favored prosecutors in more than 95 percent of the 268 trials reviewed so far, according to the National Association of Criminal Defense Lawyers (NACDL) and the Innocence Project, which are assisting the government with the country’s largest post-conviction review of questioned forensic evidence.

The cases include those of 32 defendants sentenced to death. Of those, 14 have been executed or died in prison, the groups said under an agreement with the government to release results after the review of the first 200 convictions.

For related articles by Numerian on the Ferguson racial crisis, see America’s Police on Trial, and The Cycle of Fear in Ferguson, Missouri, both posted on the jehoshuathebook.com website.
————————————
The U.S. Department of Justice Civil Rights Division has released its report on the causes behind the civil disturbances last year in Ferguson, Missouri.  This is a long overdue contribution to the national discussion on race and municipal policing strategies and tactics.  During last year’s protests in Ferguson, several reporters wrote about what appeared to be a side issue: the propensity of the Ferguson city authorities to use the police force and the municipal court as a money-raising mechanism, which relied on harassment to enforce its fines and penalties liberally bestowed upon the African-American population of Ferguson.  This side issue turns out to be the main focus of the Department of Justice report. The report turns attention away from Officer Darren Wilson, who was exonerated by the Department of Justice for civil rights violations, based on what the FBI learned about the shooting of Michael Brown.  The evidence suggests that Officer Wilson was responding reasonably to a threat to his life.  The attention instead turns to the municipal practices in Ferguson which pressured the police department to harass African-Americans as a matter of routine.  City authorities put no constraints on police behavior, and had no concern for community safety standards.  Instead, the police department, and the municipal court system, were turned into profit centers, with business-like monthly targets for revenue generation.  Here is what the report reveals:

END_OF_DOCUMENT_TOKEN_TO_BE_REPLACED

not go into brain-freeze or a national seizure at the pace of militarized police killings, racial/religious/you-name-it hatred, and the racialized rightward whirlpool of the GOP’s appeal to fearful whites.

In the latest of a spate of fatal shootings, officers of the infamous Los Angeles Police Department raced to touristy Hollywood Boulevard, where they fired 10 rounds to terminate a reportedly homeless man carrying a Swiss army pocket knife. Yes, a pocket knife. Guardian story here. Police pic of the palm-sized weapon here. The victim was white, by the way.

In Kansas City, a 15-year-old Somali Muslim was run down and killed outside a mosque by an SUV driven by a Somali Christian known to have threatened Muslims with violence.

In the much-anticipated runoff U.S. senate election in Louisiana, Democratic Senator Mary Landrieu fell to Republican Congressman Bill Cassidy. Like many Dems in this midterm, in her race she fled the causes embraced by her base (at the 11th hour she sang the praises of the Keystone Pipeline and its claimed monetary payoff for Louisiana) only to prove, once again, that a weak-kneed Democrat commands increasingly little electoral appeal against an unapologetic Republican rightie. Much of the American South, thanks to white-powered districts, is now in the hands of a GOP that is laying its last big demographic bet – in an increasingly brown country – on the fears of petrified whites.

In other words, the headlines we read are racing into a blur of brazenly militarized everyday policing, unrelenting hatred and rage, and accelerated racialization of national politics.

What do we do with this?

END_OF_DOCUMENT_TOKEN_TO_BE_REPLACED

I believe in being grateful for the universe. It is one of the few entities with a shelf life beyond that of what can be bought, sold, or stolen. Moreover, our obscene privilege as Westerners is lethally obvious. But to hell with the manufactured gratitude of Thanksgiving™, wherein kindly advertising voice-overs urge us to count our table of blessings (and hopefully shop for some more). This excerpt from a missive by Guardian columnist Jessica Valenti rightly gives that sales pitch the finger:

Face it: Thanksgiving is depressing this year, and you don’t have to give thanks

We shouldn’t ask grieving people to plaster on a smile to make the rest of us feel better. Even if it’s the holidays.

This Thanksgiving, it’s difficult not to think about loss.

For a lot of people, this time of year brings more sadness than cheer – thinking about the kinds of relationships you wish you could have with family or friend, thinking about loved ones that aren’t there. And as injustice prevails in Ferguson, as another young man of color is killed with seeming impunity, as sexual predators are given standing ovations and sexual violence across the US continues to be unearthed, it’s hard to remember how to be thankful. It’s easier to ask what we are supposed to be thankful for at all.

END_OF_DOCUMENT_TOKEN_TO_BE_REPLACED

From the wishful thinking department:

In light of a study which indicated congress is not responsive to the people of the United States, but is only responsible to the Wealth and Corporations, the ACLU filed a class action lawsuit today in Federal court. Their legal theory will be “If you are not represented in government as shown by the preponderance of government decisions, you are not represented in fact, and therefore owe the government no taxes.” They will cite various historical events during the American Revolution in support of their argument, along with examples of European majority government.
END_OF_DOCUMENT_TOKEN_TO_BE_REPLACED 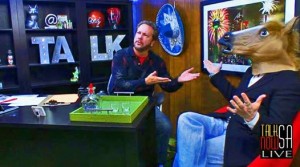 El Jefe on the air. 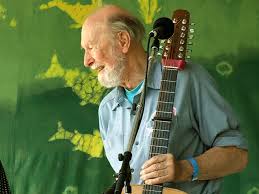 There was never any doubt which side Pete Seeger was on.

“It is for us the living, rather, to be dedicated here to the unfinished work which they who fought here have thus far so nobly advanced.”
And make no mistake about it: Pete Seeger fought all his life. We all owe him big time.

END_OF_DOCUMENT_TOKEN_TO_BE_REPLACED

That’s what I think in light of the flapdoodle at SCOTUS over recess appointments:

WASHINGTON—The Supreme Court seemed inclined to rein in the president’s power to make “recess appointments” when the Senate is out of town, as justices on Monday suggested the practice under both parties had exceeded constitutional limits.

The Constitution grants the president power “to fill up all Vacancies that may happen during the Recess of the Senate,” allowing appointees to serve temporarily without confirmation—including some whose prospects for Senate approval were unlikely.

But justices of all ideological stripes suggested Monday that a tool intended to keep the government running during the republic’s early days had morphed over the centuries into a weapon to be wielded in power struggles between Congress and the White House.

END_OF_DOCUMENT_TOKEN_TO_BE_REPLACED

You may recall a story from a few weeks ago about a NYC cab jumping a curb and hitting a British tourist, mangling her lower leg and forcing it to eb amputated. Her life was saved by a passerby who quickly wrapped his belt around her leg as a tourniquet before paramedics could scoot her to a hospital.

END_OF_DOCUMENT_TOKEN_TO_BE_REPLACED 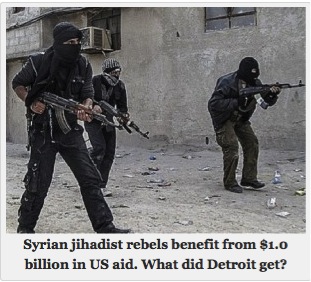 Said: The U.S. government has made a “powerful case” that the Syrian government was responsible for the recent chemical attacks that killed over a thousand Syrians.

Not said: The case that the Syrian government is responsible for the attacks is certain or nearly certain.

Said: I have decided the United States should take military action against Syrian regime targets.

Not said: There is legal justification for the United States to carry out a military strike on Syria at this time. Whatever laws or international agreements Syria has broken with their chemical attack provide for a military strike as a consequence.
END_OF_DOCUMENT_TOKEN_TO_BE_REPLACED 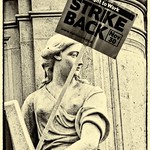 Fighting back isn’t easy. Powerful interests invested in the status quo know what is at stake.

The Corporate Capture of the Federal Courts

Thank you, Nancy, for that very kind introduction. And thank you to Caroline, Peter, and everyone at American Constitution Society (ACS) for all the hard work you do. When I was a professor at Harvard, I was always happy to attend ACS events and contribute to the ACS journal – and I even managed to steal a few students who were members of ACS to be my research assistants. (image: Kathy-Michaels)  END_OF_DOCUMENT_TOKEN_TO_BE_REPLACED

(McClatchy) – The Supreme Court on Monday struck down an Arizona law requiring that people registering to vote in federal elections provide proof of U.S. citizenship.

In the latest round of an immigration debate pitting state vs. federal powers, the court in a 7-2 decision declared that Arizona’s law went too far. Conservative and liberal justices agreed that, at least when it comes to voter registration, federal law prevails.

Any rant or obsessive/paranoid tune will do to let off steam, even manic optimism……