Retail giant Walmart enlisted the help of a private military contractor and the FBI to spy on workers pushing for a $15 hourly wage and organizing Black Friday protests in 2012 and 2013, newly released documents (pdf) reveal.

“We are fighting for all workers to be paid a fair wage and enough hours to put food on the table and provide for our families,” said Mary Pat Tifft, a Wisconsin Walmart employee of 27 years. “To think that Walmart found us such a threat that they would hire a defense contractor and engage the FBI is a mind-blowing abuse of power.”

A document made public Tuesday by worker organization OUR Walmart reveals company testimony to the National Labor Relations Board (NLRB) in January stating that Walmart had enlisted the help of arms manufacturer Lockheed Martin and the FBI Joint Terrorism Task Force to monitor workers who were organizing for higher wages and the right to unionize. OUR Walmart workers said they were illegally fired and disciplined for taking part in the “Ride for Respect” strike during Walmart’s shareholder meeting in June of 2013.

But the surveillance had long been in progress. Walmart executives mobilized the so-called “Delta” emergency response team in 2012 when they first got wind of plans for a nationwide Black Friday worker strike. As Bloomberg explained in an investigative piece published Tuesday, “the stakes were enormous.” In addition to the NLRB testimony, the new reporting states, “The details of Walmart’s efforts during the first year it confronted OUR Walmart are described in more than 1,000 pages of e-mails, reports, playbooks, charts, and graphs.”

“Great success I should say. (The response) was more than expected. It is one of the biggest actions of working class and manifestation of their unity against anti-labour policies of Government,” CPI General secretary S Sudhakar Reddy told PTI.

The strike was “successful” despite Centre trying to “dissuade” workers from proceeding with the agitation at the eleventh minute, the CPI(M) said.

“Apart from dissuading RSS-affiliated Bhartiya Mazdoor Sangh, they could not succeed in dissuading any other CTU from proceeding with the strike,” the party said in a statement.

Normal life was affected in various parts of the country, including West Bengal, Tripura, Kerala and Karnataka, as 10 CTUs today went on day-long nationwide strike to protest against changes in labour laws and privatisation of PSUs.

The strike affected transport, banking operations and other services in various parts of the country.

CPI national secretary D Raja claimed all sectors including banking, coal, transport were at the forefront of the strike and the “massive and tremendous” response to the protest sends a “clear” message to the Government that it can’t undermine the voice of working class.

The United Steelworkers, which represents 30,000 U.S. oil workers, called on four more plants to join the biggest strike since 1980 as talks dragged on with Royal Dutch Shell Plc, negotiating a labor contract for oil companies.

The USW, with members at more than 200 refineries, fuel terminals, pipelines and chemical plants across the U.S., asked workers late Friday at Motiva Enterprises LLC’s Port Arthur refinery in Texas, the nation’s largest, to join a nationwide walkout on Saturday, and issued notices for three other plants to go on strike in 24 hours.

This brings the work stoppage — which began on Feb. 1 at nine sites from California to Texas and expanded to two BP Plc refineries in the Midwest a week later — to 12 refineries and 3 other facilities. The union has rejected seven contract offers from Shell, which is representing companies including Exxon Mobil Corp. and Chevron Corp.

An agreement would end a strike at U.S. plants that account for almost 20 percent of the country’s refining capacity. It’s the first national walkout of U.S. oil workers since 1980, when a work stoppage lasted three months. The USW represents workers at plants that together account for 64 percent of U.S. fuel output.

Previously: US oil workers on largest national strike since 1980

Governor Scott Walker, a potential Republican candidate for president in 2016, supports the policy and will sign it into law if the bill makes it to his desk, a spokeswoman said Friday.

So-called right-to-work laws prohibit workers from being required to join and financially support a union – such as by paying dues – as a condition of their employment.

The announcement drew immediate criticism from Democrats and a union leader in Wisconsin, where Republican lawmakers in 2011 approved restrictions on collective bargaining for most public-sector unions except police and fire amid large demonstrations.

President Obama announced today that in the spirit of bi-partisanship he will agree to repeal Obamacare.
The press release follows:

END_OF_DOCUMENT_TOKEN_TO_BE_REPLACED

And remember how they supported unions, the (informed) workers supported unions, and hell, most of America wanted to see those plants opening up here because, jobs? And it was only a small handful of conservative morons who were all Socialism!!!!!, which of course neglects the fact that the same “socialism” was expanding production into America?

END_OF_DOCUMENT_TOKEN_TO_BE_REPLACED

From FireDogLake, By kspopulist, April 7

Weekend, overnight exploits by purchased ideologues and rank amateurs in the Kansas State legislature stripped KS public school teachers of due process rights. This will require all teachers to renegotiate their contracts without any union or other support and make them subject to termination if they don’t. Or if administrators randomly feel like it, or are pressured to do so by rank amateurs, apparently.

Local papers talked about it airily in distant terms, couching the breaking of thousands of teacher contracts in dismissive, second-hand terms. The Kansas City Star characterizes it as a solution to long intractable problems but still gives some substance of this evisceration, just farther down the column.

More substance of the bill being sent to Governor’s desk came from Topeka Capitol Journal on Sunday. This article has Tim Carpenter managing to point out that the state supreme court had showed that the state legislature had failed to provide enough school funds to areas with a lower taxbase. So this bill is how the legislature responded.

A rallying cry in the chamber apparently went up by the bill’s proponents of ‘What was so bad about state education before ‘Brown v Board of Education?’ as it was prepared for vote. This bill will take the state’s education system to a point prior to 1957 when teachers did not have tenure rights.   more at the link

END_OF_DOCUMENT_TOKEN_TO_BE_REPLACED

Since first thread is getting slow to load….who else has reasons to protest?

Pete Seeger – Which Side Are You On?

END_OF_DOCUMENT_TOKEN_TO_BE_REPLACED

This is the way you do it:

Chip Starnes, co-founder and president of Specialty Medical Supplies China, has been trapped in the company’s suburban Beijing factory since Friday. He told CNN it’s all because of a misunderstanding about layoffs and severance packages.

“I tried to leave a day and a half ago, and there was like 60 or 70 of them here inside every entrance, and every exit was barricaded,” Starnes said Tuesday from behind the gates of the factory. “I can’t go anywhere.” END_OF_DOCUMENT_TOKEN_TO_BE_REPLACED 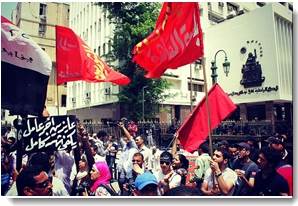 May Day in Egypt: The Struggle for Social Justice Continues
By: Mustafa Bassiouni Al-Akahbar-English
Published Thursday, May 2, 2013, Creative Commons

CAIRO – The workers’ movement in Egypt has made significant strides in the past few years. In March 2013 alone, one study registered more than 300 labor strikes in the country – a significant increase over the previous month, in which 250 strikes were recorded.  (Image)

The most important change to occur within the movement is the emergence of an independent union movement. But the numbers alone don’t tell the whole story, especially if you factor in the scope of the strikes, which have spread to nearly all parts of the country and have targeted all sectors of the economy – public and private alike – even sensitive areas, such as the strategic transportation sector.