… excuse me while I go outside and smash my guitar.

Yoo Toobs below the fold… END_OF_DOCUMENT_TOKEN_TO_BE_REPLACED

Too much intraparty sniping, too much Bush’n’Cheney, too much financial woe, and my boss is still an asshole.

Let’s twist one up and cruise with the muse.

yoo toobs below the fold END_OF_DOCUMENT_TOKEN_TO_BE_REPLACED

The album, titled Ghosts I-IV, is available on the band’s official website for prices that range from free to $300 depending on the package. Reznor is giving away the first nine cuts, as 320 kbps MP3 files, along with a 40-page PDF book that covers the entire album. For $5, fans can get the remaining 27 songs and have the option of getting the files in lossless formats including FLAC.

Less than 24 hours after the album became available, the band’s website had slowed to a crawl. At time of writing, attempts to download the free package were greeted with an error message indicating the URL was not available. A download of the $5 offering initiated, but at a speed of just 10 kbps, we weren’t optimistic we’d be hearing the new tunes anytime soon. (Administrators are racing to add more servers “to accommodate the unexpected demand,” according to a note on the site.)

END_OF_DOCUMENT_TOKEN_TO_BE_REPLACED 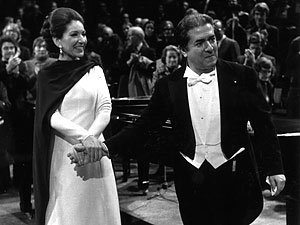 Giuseppe Di Stefano, one of the greatest tenors of the 20th century and a celebrated singing partner of soprano Maria Callas, died Monday, his wife said. He was 86.

Di Stefano died at home in Santa Maria Hoe, north of Milan, from injuries sustained in a November 2004 attack at his family’s villa in Kenya, said his wife, Monika Curth.

Unidentified assailants struck the retired tenor on the head during the attack. Di Stefano underwent surgery twice in Mombasa before being flown to Milan. He awakened from a coma, but never fully recovered.

“He was 100 percent disabled, he couldn’t even eat alone,” Curth told The Associated Press by telephone. “Lately he frequently had colds and pneumonia.”

Di Stefano, born in Sicily in 1921, made his debut in 1946 in the northern city of Reggio Emilia with Massenet’s “Manon,” and went on to sing at the world’s top opera houses, including Milan’s La Scala, New York’s Metropolitan, and in Vienna and Berlin.

His last performance was in Rome in 1992.

Recordings of his performances with Maria Callas are glorious.

For the first (and perhaps last) time, we can compare Mick Jagger to Queen Elizabeth I, and the Hells Angels to the Spanish Armada.

It’s an analogy that would not have made much sense before the revelations contained within a BBC Radio 4 documentary, which airs tonight.

The programme alleges that Jagger was the target of a 1969 assassination plot by the motorcycle gang. And he was saved by the stormy, bucking sea.

The plot was hatched following the Stones’ tragic Altamont Speedway performance in December 1969. Eighteen-year-old Meredith Hunter was killed during the gig, allegedly by one of the Hells Angels providing security. Jagger resolved, rather sensibly, that the band would never use the Angels’ services again. A decision which caused some consternation.

“The Hells Angels were so angered by Jagger’s treatment of them that they decided to kill him,” presenter Tom Mangold explained to the Sunday Telegraph.

The gang decided to attack the singer at his holiday home in Long Island, New York, the BBC claims, and to approach by sea.

Unfortunately for them – and fortunately for rock’n’roll, – the weather was having none of it. “The boat was hit by a storm and all of the men were thrown overboard,” Mangold said. The gang-members survived but opted not to give it a second go.

The saga was discovered during an unrelated interview with Mark Young, a former FBI officer who had investigated the incident.

Mick Jagger has not yet indicated whether he was ever made aware of the plot, nor if he enjoys being referred to as the Virgin Queen.

I was scrolling around iTunes today just listening to some of the new ‘alternative’ (never mind the irony that they are all mainstream) artists and it occurred to me that there is very, very little original music therein. Most of it is either a cross of Nirvana, Pearl Jam, Green Day and Sarah MacLachlan. I guess when there are but a few companies that dominate the mainstream music publishing business pathbreakers and innovators aren’t marketable. In the past there seemed to be, at least once every decade, a breakthrough band–or town–that changed the calculus. But music today and for the last several years has remained very stale. Is there a change in the wings? I doubt it–my love for Roots Americana music notwithstanding. I had hoped that the power unleashed by self-publishing music inherent with the web (and inside of iTunes and other online music stores) would create such a change. But considering the balkanized, niche nature of modern music it just doesn’t seem to be happening. Call it the big-boxzation, long-tail paradox of modern music, I suppose. The more available it is, the more homogenized. END_OF_DOCUMENT_TOKEN_TO_BE_REPLACED