END_OF_DOCUMENT_TOKEN_TO_BE_REPLACED

So the Teabaggers have another chance to pick off a few incumbent Republicans that they deem as too cozy with Obama.

Voters head to the polls today in six states to cast ballots in a the latest round of primary and runoff elections in the heart of nominating season. The marquee congressional contest is in South Carolina, where there is really only one number on the mind of Sen. Lindsey O. Graham (R): 50 percent.

Fifty percent would mean Graham can avoid a runoff. His numbers hover just below that mark, a sign of voter anger (and let’s face it, apathy) over Congress.

Also in the spotlight today, Eric Cantor also faces a must-win situation, which is very likely, but the margin of victory will be closely watched for keys to Teabagger frustration with his performance these past two years. If he comes in under 20%, it could stoke the fires for further Teabagger unrest.

The really interesting race is out in Nevada, where the Lieutenant Governor’s spot is up for grabs. If a Democrat – in this instance, Lucy Flores – wins the general election, Governor Brian Sandoval may have to postpone his attempt to win Harry Reid’s seat, as the governor’s office would flip parties. Sandoval has to count on the lesser of two evils to win the Republican primary today, in order for Flores to face a real challenger in November.

As noted earlier this year, the Teabagger influence in elections is waning, and this is most notable in this primary season: Primaries are where hardcore voters turn out, and the numbers of overall votes are lower, reinforcing the influence a voting bloc may have.

By blowing up early this year, the Teabaggers have pretty much slid into obscurity. It will be a long time before Republicans have any influence in the nation.

…Joe Biden got out in front of the White House and shamed them into a policy change: END_OF_DOCUMENT_TOKEN_TO_BE_REPLACED 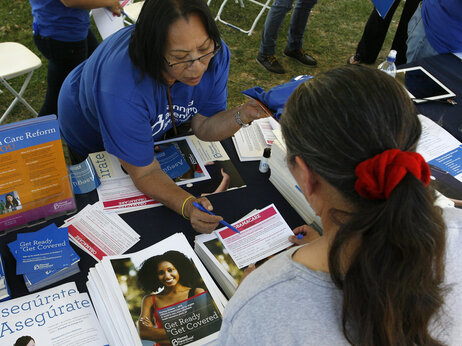 The day has arrived when Obamacare comes out of rehearsals and goes fully live, and guess what? It’s already outperformed expectations: END_OF_DOCUMENT_TOKEN_TO_BE_REPLACED

Poor, sorrowful, Frank Luntz.  The man who banished rational discourse from the Republican Party, replacing it with raw, negative emotions; the political consultant who did more to divide the American people than virtually any other public figure. Frank Luntz is having an existential crisis.  The American people he has spent all his adult life interviewing, polling, and organizing into focus groups, scare him.  They are too polarized, too argumentative, and unwilling to listen to each other.  “They want to impose their opinions rather than express them.  And they’re picking up their leads from here in Washington.”  And if that isn’t bad enough, what truly horrifies Luntz is that the American people he interviews have fallen completely for the Obama entitlement argument.  He finds that Americans actually believe there are class divisions in this country, and that redistribution of wealth makes sense to them.

END_OF_DOCUMENT_TOKEN_TO_BE_REPLACED Jonathan Chait is not wrong.

END_OF_DOCUMENT_TOKEN_TO_BE_REPLACED

Comes the salvage operation for the House Republican caucus:

House Republicans, increasingly isolated from even some of their strongest supporters more than a week into a government shutdown, began on Wednesday to consider a path out of the fiscal impasse that would raise the debt ceiling for a few weeks as they press for a broader deficit reduction deal.

That approach could possibly set aside the fight over the new health care law, which prompted the shutdown and which some Republicans will be reluctant to abandon.

In a meeting with the most ardent House conservatives, Representative Paul D. Ryan of Wisconsin, the chairman of the House Budget Committee, laid out a package focused on an overhaul of Medicare and a path toward a comprehensive simplification of the tax code.

END_OF_DOCUMENT_TOKEN_TO_BE_REPLACED

There are more than enough votes to put a clean continuing resolution (CR) up for a vote.

So why won’t Weaker Boener do it?

He’s Speaker of the House, and can destroy any member of his caucus who opposes him (oh, for the days of a real Speaker who could wrangle his people back into line!)

END_OF_DOCUMENT_TOKEN_TO_BE_REPLACED 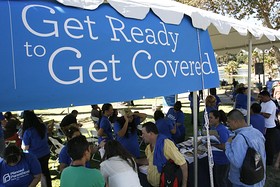 Day 2 of the Republican temper tantrum, but the end is in sight.

No, there’s no secret backroom negotiations. It’s merely the will of the American people being exercised.

You see, nobody expected the volume of people who wanted – no, needed – to sign up for health insurance. “Needed,” because under the old system insurance was unaffordable, healthcare doubly so.

END_OF_DOCUMENT_TOKEN_TO_BE_REPLACED 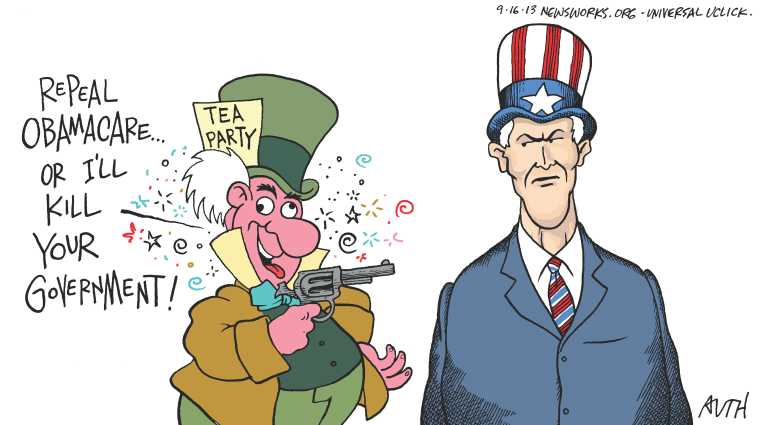 At 12:01 tonight, the government may shut down.

END_OF_DOCUMENT_TOKEN_TO_BE_REPLACED

I’ll give Ted Cruz credit for one thing, and one thing only: he’s not making a bullshit filibuster:

Republican Ted Cruz of Texas was still on the Senate floor talking Wednesday– a dramatic step in defense of his high profile and controversial plan to prevent any funding for Obamacare.

“I intend to speak in support of defunding Obamacare until I am no longer able to stand,” he said

Tuesday. “All across this country, Americans are suffering because of Obamacare. Obamacare isn’t working.”

Of course, he’s wrong: Obamacare isn’t working, it’s true. That’s because it hasn’t been implemented yet. But no one is suffering. In fact, they are thriving and will thrive even more.

END_OF_DOCUMENT_TOKEN_TO_BE_REPLACED

An Arlington, Va.-based conservative group, whose existence until now was unknown to almost everyone in politics, raised and spent $250 million in 2012 to shape political and policy debate nationwide.

The group, Freedom Partners, and its president, Marc Short, serve as an outlet for the ideas and funds of the mysterious Koch brothers, cutting checks as large as $63 million to groups promoting conservative causes, according to an IRS document to be filed shortly.

The 38-page IRS filing amounts to the Rosetta Stone of the vast web of conservative groups — some prominent, some obscure — that spend time, money and resources to influence public debate, especially over Obamacare.

The group has about 200 donors, each paying at least $100,000 in annual dues. It raised $256 million in the year after its creation in November 2011, the document shows. And it made grants of $236 million — meaning a totally unknown group was the largest sugar daddy for conservative groups in the last election, second in total spending only to Karl Rove’s American Crossroads and Crossroads GPS, which together spent about $300 million.

Short, a soft-spoken but ferociously conservative 43-year-old operative, provided us a draft of a forthcoming IRS filing that will soon be available to the public. Short, like most in the Koch empire, feels wealthy conservative activists such as Charles and David Koch get a bum rap from the media. So, Short wants to ease his groups and their cause out of the shadows.

“There’s a mystery around us that makes an interesting story,” Short said in an interview in his conference room. “There’s also a vilification that happens that gets exaggerated when your opposition thinks you’re secretive. Our members are proud to be part of [the organization].”

Chris Nelson has some interesting thoughts on this topic and Texas moderates and Democrats ought to take notice, possibly start a lawsuit. 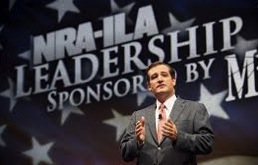 SUMMARY: purely in the spirit of patriotic, non-partisan inquiry, Your Editor would like to know how come he was forced to go through the full US naturalization legal process back in 1962, but Sen. Ted Cruz (who is proud of having memorized the entire US Constitution) has so far, at least, not had to be “naturalized”…even though we have exactly and precisely the same natal circumstances: Canadian birth to a then-US citizen Ma but non-US citizen Pa.

We’ve been asking around, again, purely in the spirit of objective non-partisanship, and the consensus from non-attorneys who have had to deal with similar issues is that under current (1986) law, it no longer matters which parent is a US citizen, either will do, and only one is needed.

END_OF_DOCUMENT_TOKEN_TO_BE_REPLACED

Michele Bachmann. We won’t have her to kick around anymore.

Obviously, she is spinning this along the lines of a…well, she never really says why she won’t run, only that it has nothing to do with the various criminal investigations she is about to undergo or with the early polling for 2014 which shows her in yet another dead heat with Democratic challenger Jim Graves, who she barely beat last November. It should also be noted that her district has been jiggered after the 2010 census, which would have forced her to pander to a new, less angry and spitefilled electorate.

Of course, that she featured these so prominently in her announcement is a sure sign that, indeed, she knew she was in deep, deep trouble and would likely be elected out of office in 2014, if in fact she made it that far after the ethics investigation.

Oddly, it was just two weeks ago that she began releasing re-election ads. Campaign ads this far ahead of an election is a move unheard of at, well, any level of politicking.

END_OF_DOCUMENT_TOKEN_TO_BE_REPLACED

Here’s the thing: the best strategy for Republicans is to just let it go:

Last November’s election dynamics complicate the picture on both fronts. Republican leaders are urging a bit of restraint in exploiting the White House’s new weaknesses.

Taken together, Republicans say, these three controversies portray a rapaciously political and inept administration. That could be a powerful message in next year’s congressional and gubernatorial elections, and perhaps in the 2016 presidential race.

[Rep. Tom Cole, R-Okla, a close ally of House Speaker John Boehner], however, said Boehner and other party leaders are keenly aware that Republicans can overdo their attacks, and even build sympathy for Obama, if their criticisms appear nakedly political or not supported by facts.

“We’ve actually had a lot of discussions about that,” Cole said.

Since the “scandals,” however factually based one of them actually is, are pretty much made up of spit and chewing gum, there’s not a lot of worry that Republicans, Inc won’t overplay their hands. They will and spectacularly. END_OF_DOCUMENT_TOKEN_TO_BE_REPLACED